Messages From the Tri-County Housing Summit 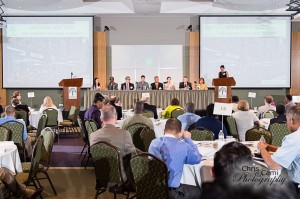 Last Friday, CLF hosted the inaugural Tri-County Housing Summit with great response. Participants heard from local leaders on the impact housing has on various elements of community life, including transportation, education, community development, and business, and Mitchell Silver from the City of Raleigh shared his success transforming Raleigh into a world-class city with great places and great neighborhoods.
Here are just a few quotes from the day that best exemplify the message of the Summit:
“The Lowcountry is the most unaffordable place to live compared to similar cities in the Southeast.” Michelle Mapp, SC Community Loan Fund. During her opening remarks, Michelle set the tone for the day by highlighting the 2012 Regional Economic Scorecard that named the Charleston region the least affordable housing market compared to its regional counterparts. She continued by explaining that this is a three-prong issue requiring a three-prong solution that will focus on employment, infrastructure, and affordable housing.“Housing is where jobs go to spend the night.” Mary Graham, Charleston Metro Chamber of Commerce. The focus of Mary’s presentation was on the relationship between housing affordability and housing location, and the gap between wages and housing costs. Throughout the region, in every zip code, there is a housing affordability issue; an issue that is exasperated by the fact that the Charleston region’s average income level is 80% of the national level. This discrepancy causes many people to “drive to where they can afford.”

“Some say housing may have caused the great recession. Today, it is leading us out of it.” John McNeill, Wells Fargo. John emphasized what many of us in the housing industry have suspected for months, that the strengthening and revitalization of the housing market is having a great impact on the entire economy.

“Don’t just plan for housing, plan for the market.” Mitchell Silver, City of Raleigh. Mitchell’s keynote address focused not only on affordable housing and economic development, but how its success is based on understanding the various demographics of the population and how they impact growth and decision making. His generational perspective of community issues proved the foundation for subsequent conversations among local housing advocates, repeatedly asking the question, “Will you give your today for their tomorrow?”

The Housing Summit was just the beginning. CLF will collaborate with community partners to create a task force to continue the discussion on WHY the region needs affordable housing and HOW we can work together to create greater opportunity. Lend your voice, be part of the discussion!