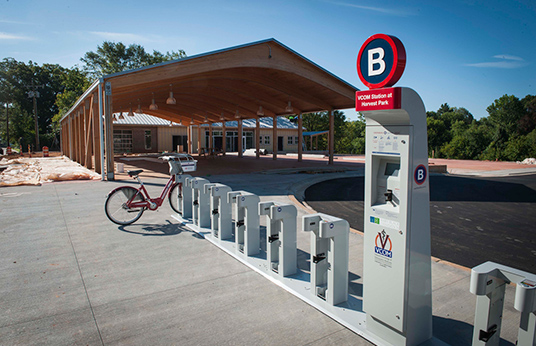 The Northside neighborhood of Spartanburg suffered many of the struggles of other disinvested neighborhoods. Blighted and crime-ridden, community members were often afraid to walk their own streets. Residents faced a high level of food insecurity and lived in a food desert, with the closest grocery store a couple of miles away. That meant residents were forced to expend precious time and financial resources on transportation just to buy groceries.

Working with Northside Development Group, a Community Development Corporation focused on improving the Northside community, Hub City Farmers Market proposed to build a market, event venue, convenience store and restaurant on the edge of the neighborhood, as part of a larger redevelopment effort. The project had exhausted all its funding options when SC Community Loan Fund stepped in with a $350,000 loan that helped build the shed that houses the farmers market.

SCCLF also became an important partner for Hub City’s advocacy work in increasing SNAP (Food Stamp) use at farmers markets, raising awareness about access to food issues, and providing a forum through events like the Food Summit that spread the story this successful partnership.

Completed in November of 2014, the farmers market provides fresh, local produce, meat and dairy once a week within the Northside neighborhood. Employing a grant that matches SNAP dollars, residents can double their purchasing power while feeding their families healthy food.

The farmers market also supports local farmers by providing a stable source of sales. Additionally, the festival atmosphere around the market and event venue, bolstered by the daily hubbub from the convenience store, has transformed the space into the front porch of the community.

The market has exceeded expectations, with sales to the Northside neighborhood increasing eight-fold.  It has also transformed the neighborhood into a safe, welcoming place. Other communities in South Carolina and beyond are now considering similar projects.

Now that the first stages of redevelopment are on track, Hub City can begin focusing on the second phase of its plan – to build decent, affordable housing in the neighborhood.

“The marketplace represents everything we’re trying to accomplish,” said former Spartanburg mayor, Bill Barnet, “which is to take this community and make it believe in itself.”