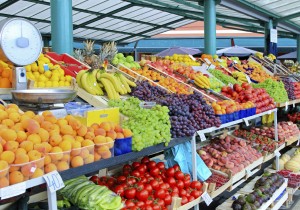 Green City Growers, Cleveland, Ohio
The Green City Growers Hydroponic Greenhouse sits on a 3-acre site in Cleveland, Ohio, and is the nation’s largest food production greenhouse within an urban area. The ability to progress from seed to harvest in 35 days allows them to immediately distribute the produce to local restaurants and grocery stores. Not only is Green City Growers providing fresh produce, they are creating jobs: with expansion imminent, the organization looks to hire 40 new employees in the near future.

Circle Food Store, New Orleans, LA
A community icon located in the 7th Ward, the Circle Food Store was the first African-American-owned grocery store in New Orleans. For nearly seventy years, the store provided produce and healthy food for nearby residents. When Hurricane Katrina devastated the city, the Circle Food Store suffered immeasurable loss-5 feet of water flooded the building, causing irreversible damage and forcing the owner to close its doors. Seven years later and with a $1 million HFFI loan, Circle Food Store is scheduled to reopen later this summer.

Low Income Investment Fund, San Francisco, California
As the lead administrator for the New York Healthy Food and Healthy Communities Fund, LIIF has provided over $30 million for its healthy food program. The owners of Key Food Market received an HFFI loan to open a new supermarket on Staten Island, which will create 33 new jobs in three years. Moisha’s Discount Supermarket, a full-service supermarket located in a low-income, underserved neighborhood in Brooklyn, received an HFFI loan to make renovations to their perishable foods department.

A Visit to Capitol Hill
After a morning of networking and discussions, attendees had the opportunity to visit the Hill to meet with their state representatives. CLF’s staff, along with representatives from Hub City Market and the Butterfly Foundation in Spartanburg, visited with Congressman Clyburn and Senator Graham’s staff to showcase the work we’re doing in South Carolina. Specifically, CLF highlighted its work in the Lowcountry; its healthy food financing initiative, which provided critical financing for Lowcountry Produce in Beaufort; and how through its funding programs, CLF is creating jobs and economic opportunities in underserved communities.

The Healthy Food Financing Initiative is a viable, effective, and economically sustainable solution to the problem of limited access to healthy, affordable food. The Initiative can reduce healthy disparities and improve the health of individuals and children; create jobs; and stimulate local economic development in low-income neighborhoods. Since 2011, $77 million has been allocated for the HFFI.